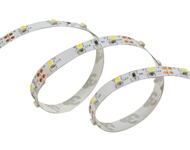 Some tips to help understanding the costs of LED strips.

The basic structure of the LED is chip on Stents, then packaged by epoxy resin, and if bigger size LEDs with multi chips, the chips will be connected by gold line, then on stents. While the different costs will come due to chips, size, lux output and consistence.

Our Chips for LEDs are with white and warm white with 10*16mil Epistar, blue and green with 12*13mil Genesis Photonics, red and yellow with 12mil Arima Optoelectronics, all are top companies in the LED industry, from Taiwan. All Chips are central wafers, to guarantee the consistence of LEDs.

The PCB factories sell PCB by square area. Tell a story, a factory of PCB for the low end market ever sold a bunch of pcb by kg, as need some cash flows. The difference between A good PCB and NOT good is craft of copper layer. The simple way to tell is thickness of PCB and to bend PCB to check whether copper will loose from core or not.

Previous: How to choose a right LED high bay

Next: What is cob led downlight