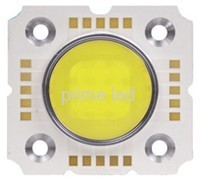 COB (Chips on Board), is a new technology of LED packaging for LED light engine. It's one of bare chip technologies, which interconnect bare chip to substrate by conductive or non-conductive adhesive, and then wire bonding to achieve its electrical connection. COB package is attach number of chips directly to the substrate, then packaged together by silica gel, epoxy resin or other materials, the yellow part is phosphor.
How COB LED comes?
The first step of COB package is to cover wafer placement point on the substrate surface by thermal conductive epoxy (usually is epoxy resin mixed with silver particles). Second is put the wafer on the substrate surface directly, then fix wafer to the substrate firmly by heat treatment. Third is to establish electrical connection between wafer and the substrate by wire bonding method. 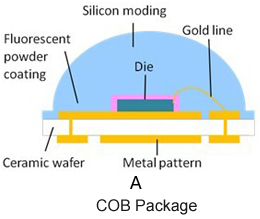 Why COB LED?
COB light source can save about 30% cost in the application, mainly lie in LED package cost, light engine production costs and the secondary light distribution costs, which is great significance for applications and promotion of semiconductor lighting.

In performance, through the rational design and micro-lens molding, COB light module can avoid the defects of point and glare light also other flaws existed in discrete light source device. It also can add some red chips appropriately, so that to improve the CRI effectively under the condition of without reduce light efficiency and lifetime significantly.

With the development of LED lighting market, lighting demand is growing rapidly, according to different inquires of lighting applications, we can produce a series COB light source module for mass production.
COB LED disadvantages:
COB packaging technology bottleneck is how to improve the reliability of the light source, and its operating temperature. However, most of the current market COB packaging companies are small and they mostly use aluminum substrate as the material. Aluminum COB reliability is low because of its greater thermal resistance, easy to cause death LED or high light attenuation. The ceramic substrate is an ideal COB material, but its cost is relatively high, especially for the power less than 2W, difficult to be accepted by customer.

Also, the demand of COB light source on the market is still low by now. In addition, COB LED exist standardization issues, the standards of package manufacturers and lighting factories are not the same, so the two parties have difficult in integration.


Previous:   Benefits Of A Precision Forged Next:  What is IP Rating's?