What is Color Rendering Index (CRI)? 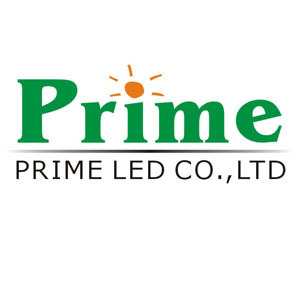 Color rendering describes how a light source makes the color of an object appear to human eyes and how well subtle variations in color shades are revealed. The Color Rendering Index (CRI) is a scale from 0 to 100 percent indicating how accurate a "given" light source is at rendering color when compared to a "reference" light source. 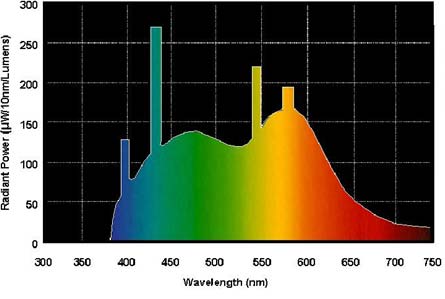 Notice the strong presence (high relative power) of ALL wavelengths (or the "full color spectrum"). Daylight provides the highest level of color rendering across the spectrum.
Compare the daylight spectral power distribution with that for a particular fluorescent lamp. 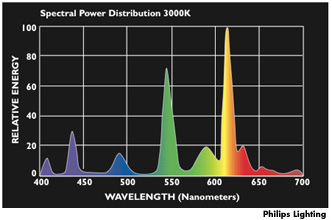 The most obvious difference is the generally lower level of relative power compared to daylight - - except for a few spikes. All wavelengths (the "full spectrum) are again present but only certain wavelengths (the spikes) are strongly present. These spikes indicate which parts of the color spectrum will be emphasized in the rendering of color for objects illuminated by the light source. This lamp has a 3000K color temperature and a CRI of 82. It produces a light that is perceived as "warmer" than daylight (3000K vs. 5000K). It's ability to render color across the spectrum is not bad, but certainly much worse than daylight. Notice the deep troughs where the curve almost reaches zero relative power at certain wavelengths.
Here is another fluorescent lamp. 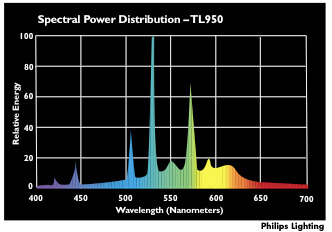